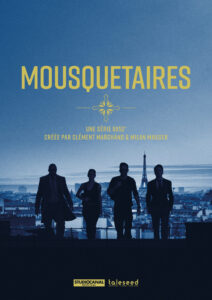 Taleseed, a Paris-based outfit launched over a year ago by a trio of experienced French media executives, is developing “Mousquetaires,” a contemporary series inspired by Alexandre Dumas’ classic “The Three Musketeers”.

The banner, which is headquartered in the Parisian start-up campus Station F, was founded by Valérie Billaut, Stéphane Cadoch and Hugues Laigneau. Billaut, the banner’s CEO, spent 20 years working at Canal Plus and M6;
Cadoch previously headed TF1 Distribution; and Laigneau also worked at the TF1 Group in the advertising sales division.

The series is being penned by Clement Marchand and Milan Mauger, who recently partnered up on the script of “Tous pourris” and “La professionelle” for Pathé. Marchand has worked for Canal Plus’s popular talk show Le Grand Journal and the satirical program les Guignols. Mauger is an actor-turned-scribe who notably starred in “Sans Rancune” with Thierry Lhermitte and directed the short “L’adjoint avait une barbe.”

We use cookies on our website to give you the most relevant experience by remembering your preferences and repeat visits. By clicking “Accept All”, you consent to the use of ALL the cookies. However, you may visit "Cookie Settings" to provide a controlled consent.
Accept AllCookie SettingsRead More
Manage consent

This website uses cookies to improve your experience while you navigate through the website. Out of these, the cookies that are categorized as necessary are stored on your browser as they are essential for the working of basic functionalities of the website. We also use third-party cookies that help us analyze and understand how you use this website. These cookies will be stored in your browser only with your consent. You also have the option to opt-out of these cookies. But opting out of some of these cookies may affect your browsing experience.
Necessary Always Enabled
Necessary cookies are absolutely essential for the website to function properly. These cookies ensure basic functionalities and security features of the website, anonymously.
Analytics
Analytical cookies are used to understand how visitors interact with the website. These cookies help provide information on metrics the number of visitors, bounce rate, traffic source, etc.
SAVE & ACCEPT
Go to Top